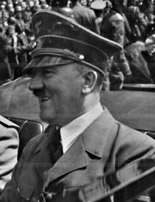 At sixteen he wanted to be an artist, but was rejected by the Vienna Academy of Arts.  He found lodgings in a poor house, where he painted, listened to Wagner's operas and became anti-semitic.

In World War I for gallantry on dangerous missions, he was twice awarded the Iron Cross.  He was hospitalized with temporary blindness, a reaction to mustard gas, and a military psychiatrist diagnosed him as hysterical and psychotic.

Leaving the army he became a party activist and firebrand speaker for what was later the Nazi Party and in 1921 became Führer (Leader).


First Part ~ Dialogue with the Dictator

About the Dialogue with Hitler

The week before this recorded interview took place, the Masters told us that they would ask the soul-who-was-Adolf-Hitler to appear fully in character for the first part of our discussion, and then speak with us in his true soul-self in the second part.

Toni remarks: There is a shift, a definite change in the energy.  It is not the force we've just been talking to.

Toni comments: This dialogue was truly a weird experience.  In part one Hitler's persona was very threatening and very dynamic.  He was hugely restless, with his paranoia seeping out all over.  There was an underlying fearfulness permeating everything.  The voice I heard was sharp, caustic, and accusatory.

In part two, the soul energy appeared as a humble, serene, compassionate, older soul, seeking to explain the unexplainable to our disbelieving human sensitivities.

Return to Talking with Leaders from the Past

To learn more about Hitler, please click below - as well as on Talking with Leaders from the Past above.  You may also be interested to read about the victim's side of the "contract".  If so please go to the Anne Frank link or for the full account order Talking with Twentieth Century Women.